I have been reading on the internet that amalgam fillings are somehow bad for you, that they cause brain tumors and the like. I have several that have been good to me for the past 15 years, and you can understand I am quite worried. I spoke to my dentist on the phone, and he said that I should consider getting my amalgam fillings replaced with white fillings. I am not a dentist, and did not know what white fillings were so I looked it up on the internet. It turns out that white fillings have BPA in them which cause cancer. I am quite concerned and do not what to do. Must I really get cancer if I want to retain my teeth? Is it not better extracting them and getting a denture at this point?

Thank you for your time,

While I understand your concern, it is a little bit misplaced, and thank the heavens for it. There is no shortage of people who are willing to scare people out of their earnings on the internet, and dentistry is especially rife with rumors and half truths. It is true that amalgam fillings leak mercury, and BPA was a concern for a while. Here I will present a comparison of the two materials. First, let’s see what they are.

Amalgam is a synthesis of different kinds of metals, ones that are relatively neutral to the human body and which are antibacterial. Bacteria cannot live on amalgam, and will die if they come into contact with it. The fillings are made up mostly of mercury, and silver, tin and copper, as well as a variety of trace metals. They have been listed in order of percentage, from greatest to smallest.

Dental amalgam has been used since ancient times, the first written instance of its use comes from the Tang dynasty, from 659, at which point it was already common practice and had several variants.

Tooth colored or white fillings are made out of composite resin. It is an entirely synthetic resin material, similar to adhesives. The material does not dehydrate, does not shrink or gain mass when it becomes wet. The material used to be weaker and would fall apart after a while, but ever since the late 1990’s, composite resin has not had this problem. 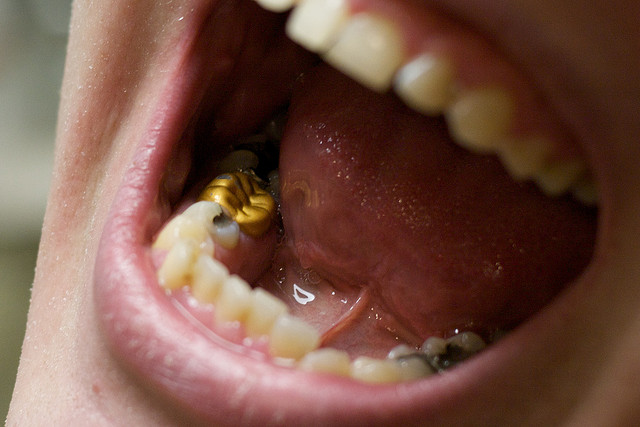 Amalgam is silver and greyish in color, reflects light and in general is pretty hard to miss, especially on front teeth. Composite resin is tooth colored or white, and can easily be mistaken for the tooth itself, and is thus more aesthetically pleasing than amalgam.

Dental amalgam lasts longer than composite resin. While composite resin will not break or shrink, it will eventually start to crumble, in a matter of ten to fifteen years, and will need to be replaced. Dental amalgam does get smaller over time, but should last incrementally longer.

Composite resin does not deflect bacteria, and if you do not clean your teeth regularly, bacteria will live on and around the resin. They cannot infect the resin or draw nutrition from it, and do not grow from it, but they can grow around it without any problems. Dental amalgam, because of ity toxicity will kill the bacteria it comes into contact with, in and around the tooth. However, teeth are just as likely to become reinfected with either type of filling, as composite gradia has some adhesive qualities and thus seals the tooth better, not leaving any space open for bacteria to get into.

Dental amalgam leaches mercury into your system. Mercury is bad for your central nervous system, causes cancer, and is a poison that will not flush out of your system. Composite resin used to leach BPA, a substance that is also cancerous, causes obesity and mental defects. This has been solved though, and now composite resins do not leach BPA anymore, at least not for way after they need to be changed anyway.

I think it is clear from the comparison In have provided that composite resin is the superior choice by far. Aside from these two kinds of fillings, there is also the option of getting glass ionomer fillings, which do not degrade, are practically invisible, but do cost more than either dental amalgam or white fillings.